In the field of Neuroscience, one often wants to capture individual neuron activity. This is often done via a microelectrode (or set of microelectrodes) inserted into the brain and recording the time series of voltage readings. Often a times, these readings are extracellular recordings taken within a neighborhood of neurons. The task of taking this time series and extracting the action potential signatures from individual neurons is called spike sorting. A modified diagram from the UCLA PDA Wiki page [1] illustrating the process is shown below. 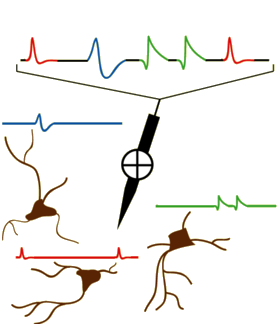 Initially, we have a raw time series of extracellular voltage recordings. This is often smoothed out using a bandpass filter. One common preprocessing step is to threshold the neurons and window each detected action potential inferred by the spike threshold crossing points. Finally, the windowed data is projected into a feature space and clustered in order to find the underlying neural signatures of each individual neuron.

A lot of the signal filtering, thresholding, and windowing is generally done using a priori knowledge of the experiment, method of data acquisition, underlying physiology, and general neuroscience knowledge. Sometimes, this may mean a scientist will analyze the neural signal traces visually and manually tune a threshold to detect spikes.

For the sake of brevity, we will focus on the final stage of spike sorting; given the windowed action potentials detected, we want to determine the underlying neurons. One original approach [2] is to use principal component analysis (PCA) in conjunction with K-Means.

In order to demonstrate the process of spike sorting, we need a dataset.

In this dataset, multiple (3-8 per subject mouse) electrodes were used in order to sample data from multiple locations. Voltages were recorded at 312.5 kHz with a voltage resolution of 14 bits [4]. This dataset is included to give one an idea of what extracellular recordings look like. Some of the raw voltage traces recorded are shown below.

We want to skip the thresholding stage for now, so we will be using a different dataset for the spike sorting. Another dataset provided on crcns.org has pre-segmented extracellular action potentials collected by the Laboratory of Dario Ringach at UCLA. This data was collected from V1 (visual cortex) neurons of macaque monkeys using a 128 channel microelectrode array. At the segmented action potential stage stage, the data is digitized at 8 bits and sampled at 30 kHz. We will use the segmented spike set from the first channel of the first subject. A few individual data samples shown below.

The entire () dataset in addition to the mean are also plotted. 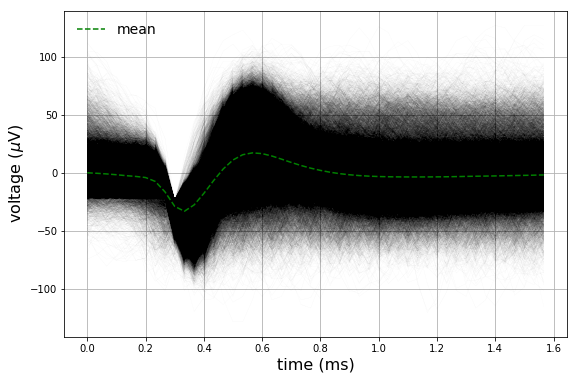 The first step for our spike sorting algorithm will be feature extraction; we will be using principal component analysis to do this. For those unfamiliar with the algorithm, it is recommended to read the Wikipedia page [8] in addition to the relevant references included [9] [10].

The way we will be using it will be treating each windowed action potential as a feature vector in order to compute the principal components. This is an effective approach, since there are distinct covariances for each neural signature. We will be using the eigen-decomposition technique [10].

Given a data matrix , where t is the time index of the sample, and n is the index of each windowed action potential, we want to project into a feature space with features per sample; we want to compute the data matrix . Since PCA computes principal components that the original data is projected onto, we can represent PCA as a linear operator , where each row represents a principal component.

We will compute the transformation matrix via an eigen-decomposition of the covariance matrix.

First, we de-mean the data:

We then go on to compute the covariance matrix:

Afterwards, we compute an eigendecomposition [6] on the covariance matrix, and sort the eigenvalue-eigenvector pairs by descending eigenvalue:

At this stage, we need to choose : how many principal components to keep. Now that we have covered how PCA is used in this use case, we will turn our attention to tuning . 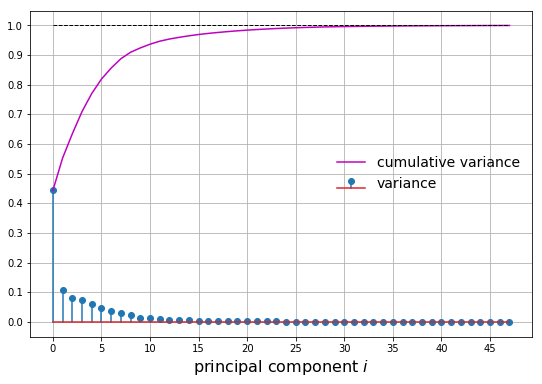 Let’s say we want to capture at least 75% of the variance. We choose principal components such that the cumulative normalized variance is greater than 0.75. In this case, we choose . We can then plot the first 4 principal components as well as the projected samples in the feature space: 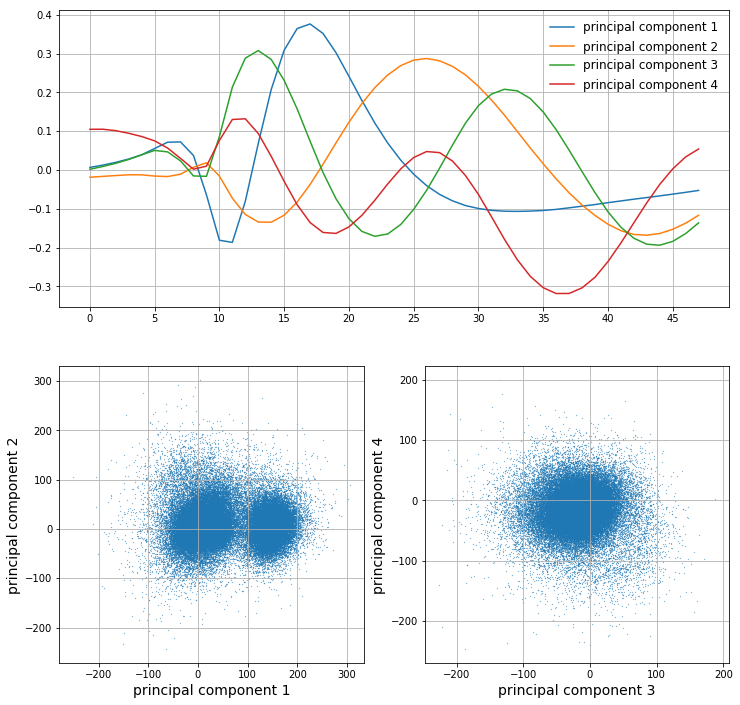 We will now run k-means clustering [7] [15] on the data projected into the feature space, or, more formally, the feature matrix . It looks like there are 2 clusters from our previous plots, so we will choose for k-means. 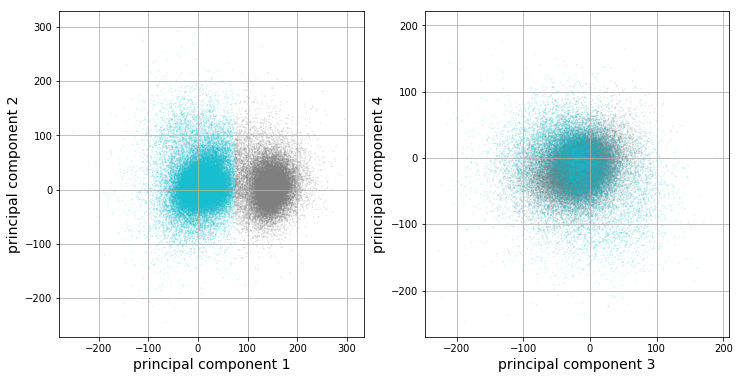 The clustering results corroborate our previous observations: only the first principal component looks like it is capturing valuable information in this dataset. The vertical boundary between the two clusters further implies that only the first component appears to be valuable for our analysis. Let’s get at intuition of what each cluster looks like by analyzing statistics of each cluster’s corresponding data points. For each cluster, there are a set of corresponding windowed action potentials. A plot of clustered means with 95% confidence intervals, in addition to the full dataset mean, are plotted below. 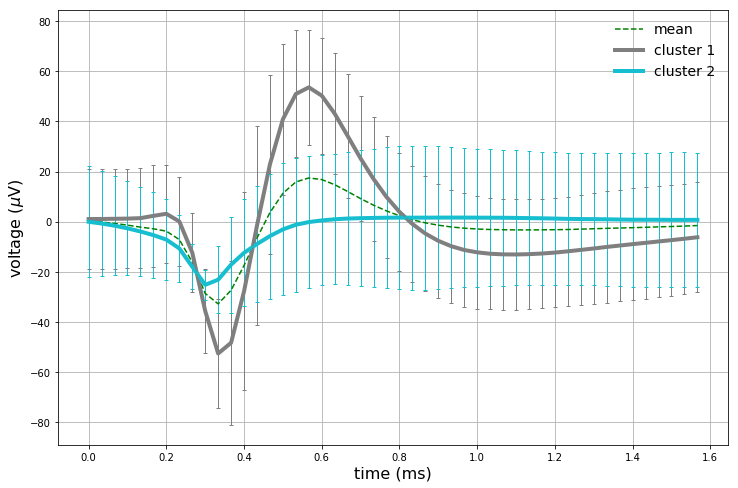 We have now captured (presumably) 2 different neurons. The full dataset mean is also plotted as a sanity check. The first cluster mean captured strongly resembles an action potential, and also strongly corresponds with the full dataset mean. The second cluster does hint at some background neuronal activity, as the initial downwards turn of the curve happens earlier than the first cluster mean. Interestingly enough, the second cluster does not have a pronounced upward spike like the first cluster.

A fundamental question arises here: are we really capturing two neurons, or is the second cluster simply noise or an artifact of our clustering technique? This is a very difficult question to answer, and is often tackled by testing various spike sorting techniques on the data, and using a priori knowledge of the experimental design [2].

We have just gone through one of the most basic forms of spike sorting. In order to get better results, many different tweaks could be applied. Some potential additional steps include:

Since the data we used was already in windowed form, it is possible that some of these fine tuning steps up to the windowing stage have already been implemented. Spike detection and classification is a key component in brain-machine interfaces [12] [13]; Many neuroprosthetics [13] [14] operate on extracellular recordings. This is still a very active area of research, and it is likely to further accelerate once commercial neural implants become more widespread.

Note from the Author

I hope you learned just as much reading this post as I did creating it. Questions? Comments? My contact information is available here.

Please cite this post using the BibTex entry below.

This work is licensed under a Creative Commons Attribution 4.0 International License.

[6] “Eigendecomposition of a matrix”, Wikipedia

You May Also Enjoy 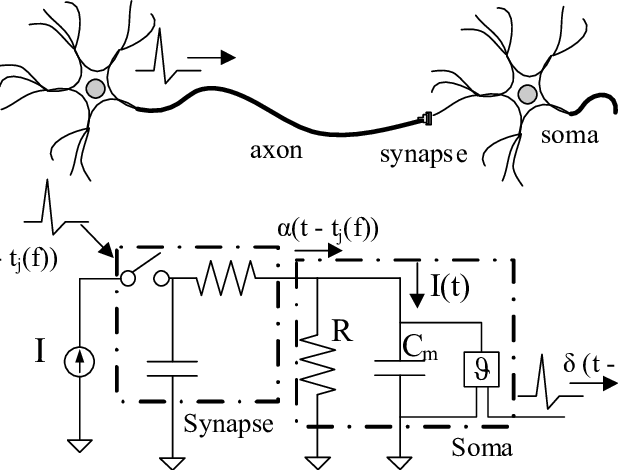